A photogram is a camera-less image made by placing objects directly onto the surface of photosensitive material and exposing it to light. The process was invented in 1834 by Henry Fox Talbot, when he set a pressed leaf on a piece of sensitised paper, covered it with a sheet of glass, and left it in the sun.

The light source I used was a colour photographic enlarger with either a cyan, yellow or magenta filter. See Lloyd Godman's Photogram Pages. 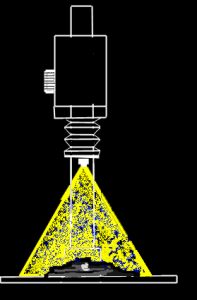 Setting up my materials with a safe light, I added food colourings, water and olive oil in shallow glass dishes, placed the dishes on my photographic paper and exposed them to the light for 1 second. This produce patterns with resemble planets and suns. By using yellow food colour and a yellow filter, I produced blue images (its complimentary colour). By adding blue food colour to this, I produced an image with magenta, and so on.

With my sunstar image, I used a blue glass bottle, and placed a black card sleeve around the bottle to forma tube also covering the lens. This acted as a funnel focusing the light. I then placed a piece of card with tiny holes in the negative carrier and exposed this on my photographic paper for 1 second using a cyan filter. This produced an image with both yellow and magenta plus an interesting texture caused by the card with holes.

Eclipse 1 was made with blue and yellow food colouring, oil and water and a Magenta filter.

Eclipse 2 was just blue food colouring with oil and water and a Magenta filter. The blobs of food colour resemble planets in front of the eclipse - I really like this one.

Blue Eclipse 2 was blue and yellow food colouring, oil and water with a Yellow filter.

black hole was yellow food colouring, oil and water with a Magenta filter which left the green ring.

This website uses cookies to improve your experience while you navigate through the website. Out of these, the cookies that are categorized as necessary are stored on your browser as they are essential for the working of basic functionalities of the website. We also use third-party cookies that help us analyze and understand how you use this website. These cookies will be stored in your browser only with your consent. You also have the option to opt-out of these cookies. But opting out of some of these cookies may affect your browsing experience.
Necessary Always Enabled
Necessary cookies are absolutely essential for the website to function properly. This category only includes cookies that ensures basic functionalities and security features of the website. These cookies do not store any personal information.
Non-necessary
Any cookies that may not be particularly necessary for the website to function and is used specifically to collect user personal data via analytics, ads, other embedded contents are termed as non-necessary cookies. It is mandatory to procure user consent prior to running these cookies on your website.
SAVE & ACCEPT